This photo, taken from Google’s “streetview” team cameras captures a time and place that will never be able to be recreated in the exact same way again. The photo highlights an amazing view of a turtle floating above the coral and reef underwater with millions of little creatures and fish in the background. Obviously the aura created by physically being there at that moment and time when the photo was taken is ultimately the greatest and will surpass any display of the moment such as the picture, but that is the point of photography. Photography often portrays unique or spectacular views of a moment for others or the photographer to relive the aura felt in the presence at every future glance of the photo. Walter Benjamin describes this marvelously as “a distance as close as it can be” and a “strange weave of space and time”. Benjamin goes on to point out that photography loses it’s meaning and value as it loses its aura. Aura can be effected by an infinite number of things, but like beauty, is often in the eye of the beholder. A painting we see may not even catch our eyes, but given the knowledge that the painting was created by a famous artist and was sold for thousands for even millions of dollars undoubtedly changes our perspective on that artworks aura. This also arises the thought of the “fake aura”; since aura is intangible it is often argued. The aura associated with original painting of the Mona Lisa gives it great value and meaning, but a recreation of the same artwork, even if the artwork is nearly identical, holds little to no similar value. This thought is a conflict in the art world, and for those who critisize the value of artwork.

Posted on January 29, 2013 by | Comments Off on Google Map Snapshot

A snapshot is a single story of a moment in time and these snapshots can be anything from a stereotypical story about a place, archeological findings from an extinct era, art or film. In “The Work of Art in the Ages” Walter Benjamin makes an interesting statement about human perception:

“During long periods of history, the mode of human sense perception changes with humanity’s entire mode of existence.”

Today this mode of existence can be seen in the snapshots of life on earth that is being captured by Google Maps. Our change in perception has not exactly been for the best, as we have become accustomed to having our desires and the world before us at a single click. I find it interesting that Benjamin makes an accurate observation about this when he states:

“The manner in which human sense perception is organized, the medium in which it is accomplished, is determined not only by nature but by historical circumstances as well.”

Today the largest medium is the internet with Google Maps showing millions of captured moments from around the world.

At first the assignment seemed daunting because of the millions of miles of roads out there lastly after some thought I decided to start with my commute to work, even though there was some interesting pictures I decided to travel along the Gorge, Hawaiian beaches and finally to Mt. St. Helens. This moment of time captured the ‘aura’ of destruction still visible from 30 years ago along with the mountain taking a breath shown from the steam rising from the crater.

Comments Off on Google Map Snapshot

Posted on January 29, 2013 by | Comments Off on Sunset Over Crystal Lake 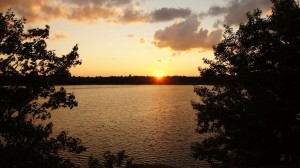 As I was I searching on Google Maps, I stumbled upon this image taken in New York. This is a photograph of a sunset over Crystal Lake. This photograph captures the moment of a beautiful evening by the lake as the day comes to a close. Although this is a beautiful sunset, there is no way to fully undergo the aura of this sunset simply by viewing a photograph. One must be there to have the entire experience. Walter Benjamin mentions the aura in his article, and says that the aura is  “the unique phenomenon of a distance, however close it may be” (4). The sun setting in the picture looks as though it is just on the other side, when in reality, it is far away. We are under the impression that we can go over to the other side and we will be closer to the sunset. We don’t know the distance. This is an example of the trickery of a photograph. The camera seems to bring the sun closer to us. For all we know, this image could’ve been photoshopped. Benjamin also says: “Even the most perfect reproduction of a work of art is lacking in one element: its presence in time and space, its unique existence at the place where it happens to be”(3). We know that the photograph was taken at an unheard of Crystal Lake, but where exactly is the lake located? Is it off a road? Or is it at a nearby park? By the sunset, we assume that the time is around 6PM. How are we to know for sure? Any work of art lacks in the element of time.

Comments Off on Sunset Over Crystal Lake 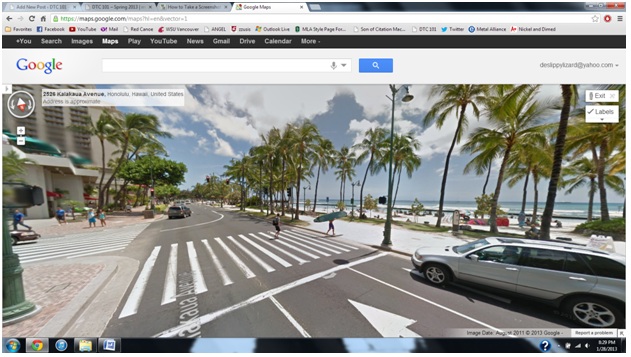 While exploring google maps, I decided to show an image on Kukulaua Ave. in Honolulu, Hawaii. I chose this image because I have been to this exact spot and thought it was interesting seeing the street view on a computer. Here in this image, we see what seems to be a typical day in paradise. Although there is a lot of beauty to this image, one cannot fully expirience the “aura” of this place by just viewing an image of it from the internet. The “aura” that is talked about in Walter Benjamin’s article, “The Work of Art in the Age of Mechanical Reproduction” (6) is essentially the mood that is created by a piece. In this image, we see a beautiful blue sky, dozens of palm trees, and Waikiki beach. By only viewing the image, one misses out on the real sights, sounds, and smells of beautiful Hawaii. The aura that is created is warm and relaxing. By going to this place, I have experienced the warmth of the sun, the gentle breeze from the ocean, the feeling of the sand as you walk on the beach. All of these aspects are truly what affect the overall aura of this place. Benjamin says that the aura of an artistic piece cannot be found in a captured image. The images are what make the viewer feel distant. This is something I agree with. Although the image appears to be beautiful, The feeling of being in that actual place in much different.

Comments Off on Blog 3: Walter Benjamin

Posted on January 29, 2013 by | Comments Off on Blog Post 3- Interstate near Sutton-Alpine United States

Benjamin states, “reproduction as offered by picture magazines and newsreels differs from the images as seen by the unarmed eye,” (4). I agree. This image of mountains offers me a sliver of it grandeur beauty. I cannot completely experience the “aura” that Benjamin remarks about (6). I can relate the clouds behind the mountain to the clouds I’ve seen at Mt. Hood. I can imagine the smell of the crisp air, similar to the air I’ve experienced before. However, I am not actually at this place. If the environment had a new sense it could offer me, I would not be able to experience it. I wouldn’t know if the mountains offered a sulfuric smell that would create nostalgia, or if the rocks are as sharp as they seem. I believe to fully experience the aura that the environment offers; all of my senses must be stimulated.

The reproduction of this image only offers my eyes a piece of its aura. One cannot interact with this environment. Benjamin similarly compares this with a live performance versus a movie, “the audience’s identification with the actor (film) is really an identification with the camera,” (8). Using this photo I’m identifying past experiences with the image the camera allows me to see. If I was actually there, I could feel the different effects that the environment would have, a change in weather perhaps. Resulting, in different emotions I would experience from interacting with the environment. Benjamin states, “For aura is tied to his presence; there can be no replica of it,”(8). 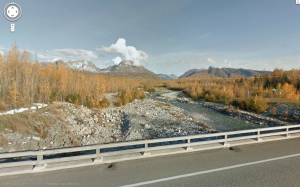