Shelley Jackson is the author of the story collection The Melancholy of Anatomy, the novel Half Life, the hypertexts Patchwork Girl and My Body, a Wunderkammer and several children’s books, most recently Mimi’s Dada Catifesto. Her stories and essays have appeared in many journals including McSweeney’s, Conjunctions, The Paris Review, The Believer, and Cabinet Magazine. In 2003 she launched her project SKIN, a story published in tattoos on 2095 volunteers. The recipient of a Howard Foundation grant, a Pushcart Prize, and the 2006 James Tiptree Jr Award, she is also co-founder with artist Christine Hill of the Interstitial Library and headmistress of the Shelley Jackson Vocational School for Ghost Speakers & Hearing-Mouth Children, a work in progress. 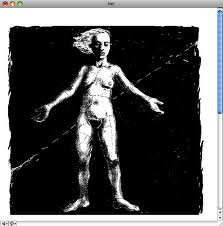 About the Literary Work

“Perhaps the true paradigmatic work of the era, Shelley Jackson’s elegantly designed, beautifully composed Patchwork Girl offers the patient reader, if there are any left in the world, just such an experience of losing oneself to a text, for as one plunges deeper and deeper into one’s own personal exploration of the relations here of creator to created and of body to text, one never fails to be rewarded and so is drawn ever deeper, until clicking the mouse is as unconscious an act as turning a page, and much less constraining, more compelling.” — Robert Coover

“Literature is training in doing without oneself. The writer does not write as herself, of herself, or in her own words. The reader hollows herself out in turn, to play host to a host of voices. If she does this, for the most part, fearlessly and with ease, it is because she is, we are really already hollow. *mouth All speech is a speaking as if—as if one were a person. As if these were one’s own thoughts. They are not; our words, our thoughts, these emphatically included, are not our own, just borrowed for a while. We exist, if you like, but only as fictional characters do. At death, we all fall out of character, and into the world. But some perform this interesting operation before death, and that is the origin of literature.

It is not ordinarily the origin of nonfiction, on whose domain I am trespassing today, but then, not knowing its place is literature’s place. If it scales its retaining walls, however, it is not to usurp the standard of the factual, but to plant in its place its own equivocal ensign, the bend sinister of the pretender.”