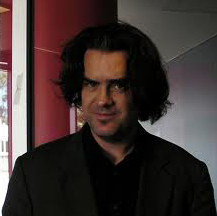 About the Artist
An Oklahoma native, Jason Nelson teaches and researches Net Art and Electronic Literature at Griffith University in the Gold Coast, Australia. He exhibits widely in galleries and journals, with work featured around globe in New York, Mexico, Taiwan, Spain, Singapore and Brazil, at FILE, ACM, LEA, ISEA, ACM, ELO and elsewhere.

About the Literary Work
Speech/Media_To_Text_Poetry_Translation uses speech to text software trained to the author’s voice to process the worlds of media (movies, radio, music, crowds, the ocean). The software, as all technology, is an imperfect and jealous lover that misunderstands explosions, or ambient noise as text, and retranslates the sounds and dialogues, finds hidden words beneath what we (and it) hears. Think of the process as an interpretive dance, a jittery technological oracle for our electronic boxes that shine out uncertain media prophets. These poems are the first in a series of noise to poetics experiments.

Once the raw text file was generated from the source (recording the movies, radio programs and on and on) I recreated the text into a poetic form. All text stayed in the same order, but words were removed, lines broken, enjambment toyed. And the only text additions allowed were a few prepositions or conjunctions, the occasional plural/possessive, some grammar wrecking punctuation and a titling system to give the whole chaotic swagger a bit more framework.

We are increasingly reliant on technology to translate the world’s texts. So how do these gizmos mutate our perceptions? How do they season and cook our words? Can these technologies be used to reveal meanings, like silent orphans hiding between gun’s cracking, crowded conversations, and the manipulative musical score of our surroundings.

The work can be accessed at http://www.secrettechnology.com/speechpoetry/.