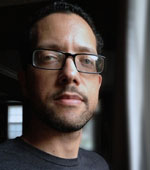 About the Artist
Erik Loyer uses tactile and performative interfaces to tell stories with interactive media. His work has been exhibited online and internationally at venues including MOCA Los Angeles, the Prix Ars Electronica, and IndieCade. Loyer’s award-winning website The Lair of the Marrow Monkey was one of the first to be added to the permanent collection of a major art museum, at SFMOMA. As Creative Director for the experimental digital humanities journal Vectors, he has designed over a dozen interactive essays in collaboration with numerous scholars, including the Webby-honored documentary Public Secrets. Loyer founded Opertoon in 2008 to explore the storytelling potential of gesture-sensitive devices, creating and publishing a variety of tactile narratives including the best-selling and critically-acclaimed iOS application Strange Rain. His current projects include the immersive graphic novel Upgrade Soul for iPad and iPhone and the creative direction for Scalar, a new publishing platform being developed by the Alliance for Networking Visual Culture.

About the Literary Work
“Breathing Room” is designed for the Leap Motion Controller.  A teaser video is available at Opertoons.