Pathfinders:  25 Years of Experimental Literary Art, the exhibit that opens on January 9 at the Modern Language Association 2014 Convention, begins with the premise that curation is a critical practice born out of research and, so, constitutes a scholarly activity.  While this sentiment is not a controversial one in fields like Fine Art where curating works of art relies on deep knowledge of art, history, and culture; highly honed interpretative and evaluative skills; and a great deal of creativity, it is relatively new idea for the Humanities. The recent book by Anne Burdick et al, Digital_Humanities, however, makes a strong case for curation as a “fundamental activit[y] at the core of Digital Humanities. Just as in Fine Art, curation in Digital Humanities involves “the selection and organization of materials in an interpretative framework, argument, or exhibit” that “brings humanistic values into play in ways that [are] difficult to achieve in traditional museum or library settings” (my emphasis, 17).

To make the connection between scholarship and curating absolutely clear, this exhibit is built directly out of Pathfinders:  Documenting the Experience of Early Digital Literature, a digital preservation project led by Stuart Moulthrop and me and sponsored by a National Endowment for the Humanities Level II Start Up grant. 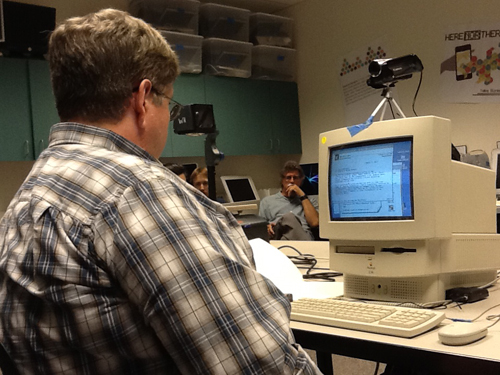 Pathfinders, the project, is an unusual digital preservation scholarly activity in that its intent is to capture not just the work of art but also the user’s experience with the work. In that regard, we have videotaped each of four electronic literature artists reading through their work. This reading we call a “traversal” because it leads a viewer through a work that is both interactive and multi-linear, from its beginning to some level of closure.  We add to the artists’ traversals, those by readers, some of whom have never experienced electronic literature before or who may not be familiar with early digital literature. Interviews with the artists and readers augment the information, which will be edited, collected, and eventually disseminated in a multimedia book. So, the first order of selection for Pathfinders came out of an overarching conceptual framework focusing on a particular artifact––early digital literature––and particular seminal works constituting experiments with digital texts that can no longer be experienced on current computing devices:  Stuart Moulthrop’s Victory Garden; John McDaid’s Uncle Buddy’s Phantom Funhouse; Judy Malloy’s Uncle Roger; and Shelley Jackson’s Patchwork Girl. In essence, they all comprise works that are quickly becoming lost works of literary art.

Pathfinders, the exhibit, showcases the work that Stuart and I have, heretofore, completed on the project––that is, all of the videotaping of the traversals and interviews for each of the four artists––and extends it into current experimental work. In that vein, the exhibit is divided into two sections, with early experimental works organized at the front of the space and current work, beyond. Thus, the exhibit opens with Station 1, entitled “Paths to Digital Literature,” featuring four vintage Macintoshes from my lab (The Electronic Literature Lab, or ELL).  Here visitors find an Apple IIe displaying Uncle Roger; the Mac Classic featuring Victory Garden; the Mac LC 575, Patchwork Girl; and the LC 580, Uncle Buddy’s Phantom Funhouse.  The addition of Bill Bly’s We Descend to the exhibit, showcased alongside McDaid’s work, hints to the next phase of Pathfinders––a partnership with the University of Maryland’s Maryland Institute for Technology in the Humanities, where Bly’s work has been collected. Plans also include the collaboration with the University of Colorado Boulder’s Media Archaeology Lab, led by Lori Emerson. As mentioned previously, these five works represent early experiments with digital literature, pioneering efforts by artists that are part and parcel of high art that parallel the impetus to experiment that also occurs in print literature. This particular argument lies at the heart of the exhibit, Electronic Literature & Its Emerging Forms, that Kathi Inman Berens and I curated at the Library of Congress in April 2013, where we showed, for example, the connection between concrete and kinetic poetry, cut up poetry and hypertext, among other ideas. 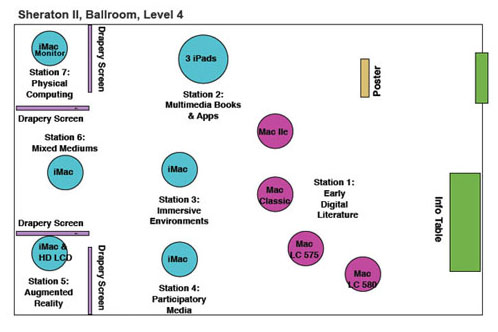 Curatorial plan for Pathfinders exhibit at the Modern Language Association 2014

At Pathfinders accompanying each computer in Station 1 will also be an iPad displaying raw video footage from the traversals and interviews taken during the Pathfinders project data collection. This additional material will make it possible for visitors to experience the works, first hand, on the computer on which readers would have originally experienced the work when it was first released and, then, see and hear the artists traverse the work themselves and talk about the production of the work. Culturally and intellectually situating the works in this way aims to provide an enriched intellectual experience for exhibit visitors.

Past this section of the exhibit visitors find “Current Directions” where they discover contemporary experiments with digital literature.  As Stuart and I point out at the exhibit website, it is our contention that just as hypertext authoring systems like Storyspace and Hypercard were seen as new technologies that allowed for highly experimental writing in the 1980s and 1990s (Bolter, Writing Space, 1st Ed., 23), contemporary technologies like Leap Motion, augmented reality software, and other technologies also lend themselves for compelling experimental literary work.

The process of selection of this section of the exhibit centers on large categories of works and employs terminology that may be familiar to Digital Humanists visiting the exhibit.  So, here we find stations entitled “Multimedia Books and Apps,” “Immersive Environments,” “Participatory Media,” “Augmented Reality,” “Physical Computing,” and “Mixed Mediums.”  In all cases, we selected only one or a couple of works to highlight, aiming for a small amount of art to exhibit so that visitors can, ostensibly, experience all of the art during the convention.  We also feature some new and upcoming artists who may not yet be well known among those working in electronic literature as well as to include artists from outside of the U.S. to offer a global perspective.  And finally, we have chosen some works that are so new, like Amaranth Borsuk, Kate Durbin, and Ian Hatcher’s Abra, that they have come to us in beta versions.

At Station 2 “Multimedia Books and Apps,” visitors find Samantha Gorman & Danny Cannizzaro’s PRY, Amaranth Borsuk, Kate Durbin, & Ian Hatcher’s Abra, and Andreas Muller’s “For All Seasons.”  Displayed on iPads, these works represent new forms of digital publication.  While multimedia books can have close resemblances to websites, apps represent the first born-digital object with no corresponding print cognate. From this perspective, they constitute compelling objects of critical study, particularly as an environment for literary production. Station 3 “Immersive Environments” offers Christine Wilks and Andy Campbell’s Inkubus, an interactive playable narrative that utilizes both 2 and 3D technologies for immersing readers in the work. Station 4 “Participatory Media” highlights Jay Bushman’s tweeting of Mike Daisey’s performance piece, The @gony @nd the Ecst@sy of Steve Jobs, and, so, represents a work of twitterature, the first featured at a MLA exhibit. At Station 5  “Augmented Reality” visitors will find Jacob Garbe’s Closed Rooms, Soft Whispers, a work that brings together analog and digital into a haunting virtual experience. Station 6 “Physical Computing” hosts Josh Tanenbaum and Karen Tanenbaum’s The Reading Glove.  I experienced a version of this work at the International Digital Media and Arts Association conference in Vancouver, Canada in 2011 where, at the time, both artists were graduate students studying at Simon Fraser University. While the original offered a tabletop interface with which to interact with the objects, this portable version created especially for the Pathfinders exhibit utilizes a computer screen. Finally, Station 7 “Mixed Mediums” offers both Erik Loyer’s Leap Motion experiment with physical gestures and digital narrative, “Breathing Room,” and Jason Nelson’s experiment with speech and text, Speech/Media_To_Text_Poetry_Translation. 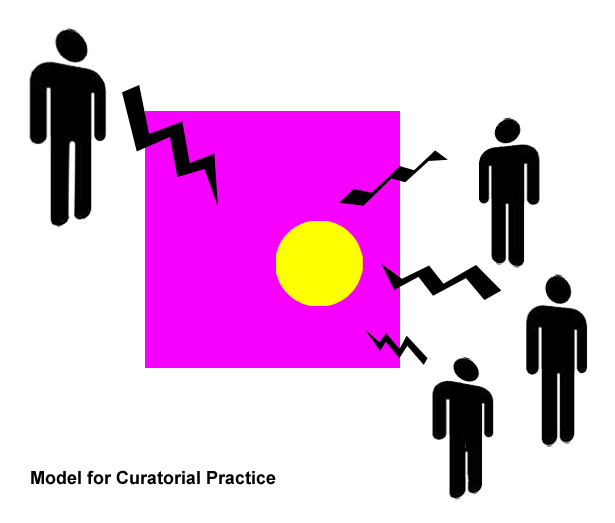 heavy emphasis on empirical, direct experience with objects as they combine with other objects in the exhibit space, with other human observers experiencing the objects, and with objects’ and observers’ relationship with the physical environment in which they are found; writing that generates from this activity serves as documentation of that primary intellectual activity and articulates, scriptually, the theoretical underpinnings and methodologies used to produce and execute the activity that is implicit in the act of curation.  In essence, what Pathfinders seeks to demonstrate is an important concept in Digital Humanities––that doing is not separate from thinking.

Stuart and I hope if you are planning to attend the MLA 2014 Convention in Chicago that you will visit our Pathfinders exhibit and experience, firsthand, our research into past and present experimental digital literature.