Posted on February 9, 2014 by Dene Grigar | Comments Off on We All Descend

[Special Note:  This posting comes as a response to the traversal and interview that Stuart and I conducted with Bill Bly, author of the hypertext novel We Descend, at the Maryland Institute for Technology in the Humanities (MITH) at the University of Maryland, where Bly’s papers are now archived.  A special thank you to Dr. Matthew Kirschenbaum, Associate Director of MITH, for allowing us the opportunity to visit the archives and to videotape in MITH offices and for participating in a traversal for us, and to Bill Bly for the time he gave us and for his art.  Pathfinders is richer for it.]

The Buzzfeed game I played yesterday about where I would reside in Dante’s Inferno placed me right smack in Limbo with the virtuous pagans, Plato and Aristotle.  Those of you who know me probably understand why spending eternity with these Greek philosophers does not seem much of a punishment, even if it is hell we are talking about.  Of course, in Dante’s world view this nether land of shades and shadows is actually a far better  location than any of hell’s circles below.

Dante’s story of his decent to this realm of the afterlife and his vision of the place he believes a great many of us will end up reminds me of Bill Bly’s We Descend, another epic structured as a journey.  My Pathfinders Co-PI Stuart Moulthrop and I had just spent the previous weekend with Bill at the Maryland Institute for Technology in the Humanities where we videotaped several traversals of his work.  So, Bill’s story of Edgerus digging through a maze of information in his journey to knowledge about the past was still haunting me days after my return.  Thinking about the metaphor of “the descent” as I played the Buzzfeed game, I was struck by the idea that Bill’s use of it has us going as deep into the abyss as we do for Dante’s underworld, for We Descend takes us through a complex scheme of space––and of time. 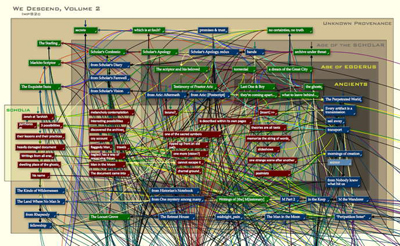 I know.  It is difficult to imagine a more complex schema than Dante’s hell with its many circles and bolgias, but We Descend holds it own against the medieval masterpiece in this regard.  The story takes us through four timelines (five, if you count the timeline the reader represents), beginning with a future post-apocalyptic storyline of Edgerus who digs down through eons of data to reconstruct cultural history, encountering, along the way, Writings by an ancient who calls himself the Last One.  As Bill says, “The Last One transmits the even more ancient writings from the magnificent civilization whose self-destruction he has survived” (Bly, 10 Feb. 2014).  The metaphor of the “archaeological dig” that Bill talked about in his interview with Stuart and me, serves, he said, to “help us to visualize time.” (See Bly’s “Afterward” for a better sense of the levels he presents in the story.) And it does.  Here, I am reminded of how time unfolded below me as I peered down at the ruins of Homer’s Troy––Troy VI and VII––among the nine total possible Troys––and imaging Priam, Hector, and Paris having once dwelled upon one of stratum of soil among so many of them. And there I stood representing yet another Troy, one far removed from theirs.

We spend so little time on earth that we are fooled into thinking of time as a continuum.  Without realizing it, we are tainted by Plato’s allegory of the cave from the Republic, so seamlessly woven into the fabric of Western culture that we are unaware of its influence. And so, we believe that the journey of humankind––and our own personal journeys, for that matter––takes us from ignorance to wisdom, that evolution means eventual enlightenment if humanity can just stick it out long enough.  I mean, modern humans are a far cry from Neandethrals, right?  In this way, Bill’s descent differs from Dante’s.  Whereas Dante hikes into hell’s hole with Virgil as his guide and leaves a better person for it by learning the true nature of sin, we wander alone through We Descend facing hundreds of possible paths with no idea if we will come out of it with any understanding of anything.  Bill’s story is, as he says,  about “evolutionary descent” (Bly Interview).  We refer to ourselves, as Bill reminds us, as “descendants” of those who preceded us, rather than their “ascendants,” a far cry from the more noble pilgrim status conferred upon Dante.  Dante does, indeed, get to climb up Mt. Purgatory and the heavens after his sojourn through hell. 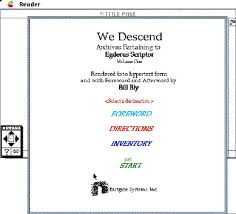 I exaggerate as writers sometimes do to make a point.  Actually, we do come out of We Descend with an understanding.  In fact, Bill revealed this truth when he related the genesis of this story to Stuart and me:  There were “five words,” he said, that came into his head, like a motif that had to be written down: “If this document was authentic.” Thus, the story suggests that humanity’s journey, our descent and ascent over thousands of years, is an odyssey to find those things that are authentic, to seek the true nature of truth.  We can see through this tautology if we remember that the Greek word for truth is alethe, or “not forgetting.” Truth, then, is simply those things that we remember. It is through seeking cultural heritage, through preserving the memory of a people, as the characters in Bill’s story do, that truth is located and maintained.

Ultimately, what We Descend suggests is that we––all humans––are capable of descending and ascending, depending on how heroically we fight for the truth, how hard we work to place truth at the center of our lives.