This category provides updates about the project.

Posted on January 9, 2016 by Dene Grigar | Comments Off on Reader Mediations in Electronic Literature, #s734

Below is an abridged version of the paper, entitled “Preserving Literary Apps,” I gave at the MLA 2016 on Sunday, January 10, 2016 at the Reader Mediations in Electronic Literature panel with (organizer) Elika Ortega, Kathi Inman Berens, and Rita Raley; Mark Sample, Chair. The original paper is 25oo words in length and the slide show, created in Keynote, contains 29 slides. Much appreciation to Eileen Clancy who created a Storify about it. 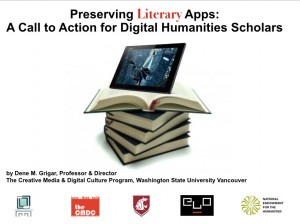 For the past four years I have been involved in preserving works of electronic literature through a project called Pathfinders: Documenting the Experience of Early Digital Literature with colleague Stuart Moulthrop from the University of 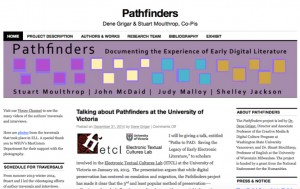 Wisconsin—Milwaukee). Our efforts have focused on pre-web hypertext fiction and poetry, from 1986-1995 produced with programming languages like BASIC or authoring systems like Storyspace and HyperCard and require a degree of interactivity between the reader and the work. These works were also among the first to be sold commercially in the U.S. and, because of their availability through commercial distribution, were influential in shaping literary theory and criticism that, today, are used to discuss born digital writing. They are also literary works in danger of becoming inaccessible to the public because they were produced on and for computer platforms that today are obsolete. 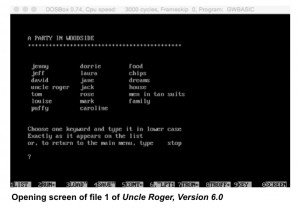 While some very popular works of electronic literature from this period, like Judy Malloy’s ground-breaking database novel, Uncle Roger, have been emulated for use on contemporary computers, or like Shelley Jackson’s Patchwork Girl, have been migrated from their original floppy disks and CDs to flash drives, the bulk of the works produced during this period are in danger of

becoming lost to literary scholars because they literally cannot be read due to the fact that they require software and hardware no longer available.

Stuart and I see this as a serious problem because these works represent an important aspect of our late 20th century-early 21st century cultural experience in that they demonstrate the moment when literary artists began to make the leap from paper to the electronic medium for the purpose of creative expression and experimentation. 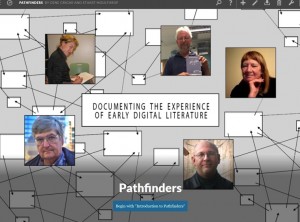 Our research led us to document four works––Judy Malloy’s Uncle Roger, Version 3.3, John McDaid’s Uncle Buddy’s Phantom Funhouse, Shelley Jackson’s Patchwork Girl, and Bill Bly’s We Descend, an activity that has culminated to date as a multimedia eBook, entitled Pathfinders published last June and a book of critical commentary called Traversals forthcoming with MIT Press this year. Our work is ongoing. Now as we are planning for the next round of e-lit to document, I am also turning my attention to literary mobile apps, which I see as another body of born digital literature facing comparable challenges as a durable art form. 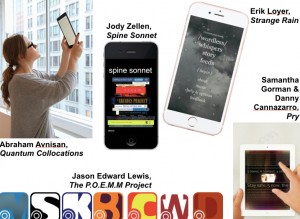 These are narratives, works of poetry, or essays produced and distributed to the public as an app for mobile devices. Examples include Erik Loyer’s haunting digital narrative Strange Rain, a work that received much notice in the press when it was first released in 2011. Mark Sample presented a paper on the work at the MLA in 2012 (http://www.samplereality.com/tag/erik-loyer/). Jason Edward Lewis has produced seven poetic works as apps in an award-winning series called The P.O.E.M.M. Project, or “Poetry for Excitable [Mobile] Media” (http://www.poemm.net). Samantha Gorman and Danny Cannazarro’s mobile narrative, Pry, is another award-winning, well-regarded work produced as an app. Abraham Avnisan’s Quantum Collocations. The literary work my colleague Kathi Inman Berens will be discussing,TOC: A Novel by Steve Tomasula, was originally produced on DVD but reworked for the app environment. 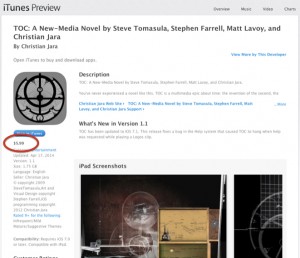 Many artists have experimented with apps for some of the same reasons the authors Stuart and I documented for Pathfinders ––that is, the desire to explore a new medium, creative curiosity, the realization of a different—and with the advent of the web—a broader audience. Others recognize that apps provide an opportunity to sell one’s work in a way that has not been heretofore possible when published on the web. Even at $5.99, a literary app offers the possibility of netting more income than a work of web poetry. To put this into perspective, when Judy Malloy sold her boxed set of Uncle Roger on floppy disks in 1988 through the Art Com Catalog, it was for $15, and she sold 20 copies. By comparison, the app market is expected to be a $77 billion industry by 2017, with close to 50% of those apps costing $.99 or more (http://www.entrepreneur.com/article/236832). Challenges aside, which I am sure Kathi will discuss, literary apps offer a way to generate income from writing.

But there are some very serious drawbacks to publishing one’s work as an app for a mobile device. Let me quickly explain the three types of apps so that the point I will be making later makes sense. The first type of app is a web-based app. This is essentially a website that has been optimized so that it is responsive to all computing devices. These are generally produced with HTML, CSS, and can include javascript, JQuery, and other languages. I’m not worried about this type of literary app because like other hand-coded websites, even those created in the early days of Netscape Navigator (1994-1997) and Communicator (1997-2002), they are readable and accessible. It is the second and third types––the hybrid and native apps––that are optimized for distribution through the proprietary operating systems of Apple, Android, or Windows. Native apps are programmed in more complex languages like Objective C, Java, sometimes C Sharp and, then, prepared for the mobile market with the software development kit, or SDK, indigenous to a specific platform, while Hybrid apps are created with HTML, CSS and Javascript like web apps but are wrapped in software like PhoneGap or even game engines like Unity before they are prepared for the specific mobile market they are aimed at. 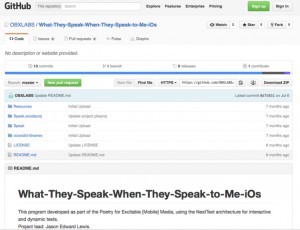 So, here are the problems as I see it. The first is obvious: Unless the source code for a literary app is made openly available to scholars, it will not be possible to preserve the work, whether it is to migrate or emulate it. Luckily Jason Edward Lewis does indeed make his source code available off his website, but many others, like the first literary app, The Carrier, published in 2009, do not. And so when the work is no longer supported by the artists, it becomes obsolete. In fact, that particular app––a geo-locative graphic novel that includes 680 panels of story, takes place over a 10 day period, and incorporates many of the phone’s features as storytelling devices, like sending updates to the user via email––is a particularly telling case in that it required such server-side support. If in the past you have downloaded a copy of it to your mobile device, you will find today that though the splash page loads, the app itself does not launch. It is now not possible to document the work. All that is left is the project website, which offers mostly promotional information.

The second problem may not be as obvious, but it is not any less challenging for scholars: We cannot easily study versions of literary apps because once an app is updated, the previous version is wiped out or access to beta versions shared 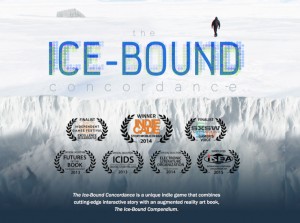 for study expires. My beta version of Aaron Reed and Jacob Garbe’s “The Ice-Bound Concordance,” which I was sent to me because I supported their Kickstarter campaign, has expired, and I am no longer able to access it for the purpose of comparing it to the official version once it is released. 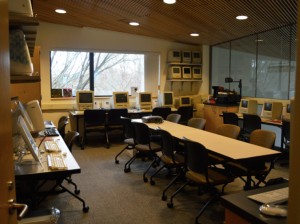 What I am just starting to do to mitigate these problems with literary apps in regards to preserving them, now that I have moved my Electronic Literature Lab to its new space two weeks ago, is to decommission mobile devices with various operating systems, taking them offline, and saving literary apps, different versions of them on the various devices. This is an expensive endeavor, but one that needs to be undertaken in order to preserve this literary form for future study.

My call to action for Digital Humanities scholars is this: Join me in my endeavors to document born digital literature. Here is what you can do if you make literary apps: Make the source code for all versions of your work available to others from a public site. Here is what you can do if you want to study literature apps: Publish scholarship about literary apps and in your work provide information documentation of the work through screen shots, descriptions of the contents, and the kind of interaction that occurs. These are not difficult activities to engage in but are important ones for the purpose of providing present and future scholars to understand the significant experimentation taking place in regards to literary production in the 21st century.

Comments Off on Reader Mediations in Electronic Literature, #s734

Posted on June 20, 2013 by Dene Grigar | Comments Off on Exhibit of Pathfinders Work at MLA 2014 Conference

Stuart and I are delighted to report that we will be co-curating an exhibit of electronic literature at the forthcoming MLA 2014 Convention in Chicago, IL. and are building the exhibit around our “Pathfinders” project.  Invitations to the four artists featured in our project along with one additional early digital artist have gone out.

Comments Off on Exhibit of Pathfinders Work at MLA 2014 Conference

Stuart and I have finalized the schedule for videotaping the artists performing their works––events we are calling “traversals.”  Three traversals will take place at my Electronic Literature Lab (ELL) at Washington State University Vancouver and one will take place at Princeton University.  We are now developing the protocols for the traversals and lining up the video production team.

Here is the schedule: